In 1609 to Bauska was granted with its seal, meaning that this year is considered as the year of granting of the rights to the town. In 1615 the Duke Friedrich of Kurzeme granted Bauska the privilege to build the Town Hall Building. In the centre of market square there was already a small one-storied Town Hall Building constructed in the end of the 16th century that was now made bigger and higher. After a year the new building was ready for the Town Hall. It was a two-storied concrete building with an archway in the lengthened Eastern end and the tower with dome and steeple built out of the timber frame and infill construction. Facades were temperately decorated only by volutes in the lowest part of the pediments of triangle type and by corner rustification. In the 17th century Bauska Town Hall Building was the biggest one in Kurzeme. 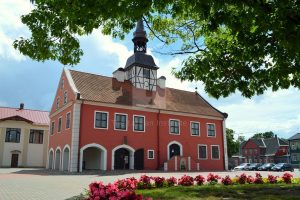 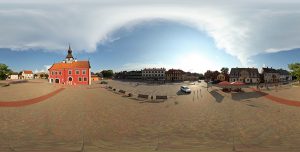 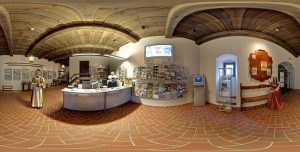